5 Reasons Why Gay Dating Is So Difficult 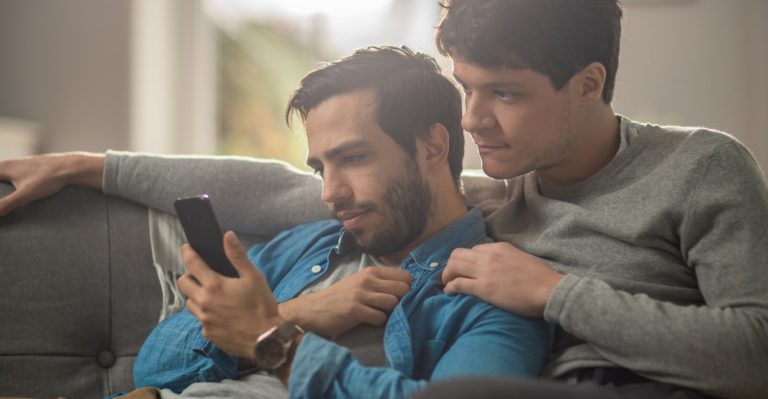 Simply put, gay dating is a form of online dating exclusive to homosexual men. There are two different kinds of dating available to men, including serious dating and casual dating. Between these two kinds of dating, activities on gay dating sites seem more casual.

Casual dating is essentially dating for one-night stands, or casual sex with no strings attached. It works with a hookup culture mentality and encourages men to focus on sex as the primary emphasis of their dating intentions.

This means focusing on pictures and looks over anything deeper.

Serious dating, on the other hand, is focused on connecting people for long-term relationships, even toward marriage. This means that the goal isn’t just to hookup and have casual sex, but rather to find someone for a lasting relationship, wherever that may go.

Need advice as a senior who has come out as gay recently? Read our guidance and advice on what you can expect after coming out.

Dating within the gay community online has become something of a problem, as the emphasis has grown to focus more on casual sex than building lasting relationships. However, this only scratches at the surface of the problems gay men face with online dating.

Top 5 reasons why gay dating is so difficult

There are many reasons why gay men might find dating online difficult, and the following list is by no means a comprehensive examination of the issues they face when dating. However, these are some of the most prominent reasons for dating difficulties amongst gay men:

Although casual dating apps for gay men have seen a large increase in use over recent years, and men have been enjoying their accessibility and success for scoring easy sex, they have also been a double-edged sword.

With so many men focused on the casual dating scene, it has made it harder to find gay men who are interested in serious dating, much less who are using serious dating sites or apps.

This means that anyone looking to serious date within the gay community is already looking at a smaller group of interested men.

This is a fairly broad topic, but it relates to the difficulty gay men may have when searching for a suitable partner, and what sort of person they ideally want to be with.

This is partly because of the role casual dating has played in the community, as it has left a mark on what most may assume to be the norm. It can also refer to the sort of self-image many gay men may have of themselves, and that they aren’t meeting others’ expectations.

Whether it comes from a history of discrimination or from discrimination within the gay community for not meeting a type of standard, struggling with unrealistic expectations has been and continues to be a hurdle for many gay men looking for dating opportunities online.

This means that Getting married wasn’t an option for the community until very recently, so commitment from a legal standpoint was actually far from many of the minds of gay men in the community.

As such, it is little wonder that the casual dating scene was the more popular avenue for gay dating overall, as social norms didn’t allow for gay men to publicly maintain a relationship.

Times have changed, of course, but the lasting impact can be seen in the preference of casual one night stands over the open and serious online dating sites for gay singles.

Need inspiration for your gay date? Check out our list of the best LGBT movies for a romantic movie night.

For many gay men who are looking for a partner online, even amongst serious online dating platforms, they may find that their partners simply want different things than they do.

This can be a range of things that don’t align between the two, such as interests, life-goals, relationship wishes, monogamy, and so on.

Finally, it may just be the case that the gay community in an area isn’t as vibrant as it may be in other areas of the world. Rural areas and smaller towns may have very slim pickings for gay men who want serious dating online, leaving them with little success and a lot of difficulty.

Queer people of color not only face homophobia but also racist microaggressions in dating. Our author Felix has addressed the issue of racism within the LGBTQ+ community.

These are the leading brands for gay dating sites and apps on the market today.

How to improve your odds with online dating

Given some of the difficulties that gay men face when dating online, it may seem like an overwhelming situation. However, there are a few things that you can do to improve your odds with online gay dating for someone looking for a serious relationship.

The first is perhaps the most obvious but stick to the serious dating sites. If you go onto a casual dating site expecting something other than a casual sex encounter, then your expectations need to be adjusted.

In short, look for the kind of relationship on the site that encourages it.

The next thing that will help you out immensely is if you temper your expectations for what kind of person you find. Shoot for the moon but realize that there are many wonderful people out there who aren’t physically perfect. You might just be surprised if you keep an open mind.

If you want a serious relationship, don’t be afraid to make that clear for both yourself and to others that you are looking for precisely that. Remember, relationships now amongst gay men are socially acceptable in most areas.

Finally, if you are having trouble finding a partner within your immediate area, possibly due to living in a smaller town or in a rural area, you may have to broaden your search. Cities are the best place to find other gay men, but that doesn’t mean they are exclusive there either.

Look toward other small towns and villages within a reasonable distance, as there are more than likely other gay men in a similar situation as you are.

How to know which online dating site is right for you

In the end, this is something that you will have to determine on your own. You are the best judge of what is right for you. Find a dating site that is comfortable for you to use that gets good reviews and give it a shot.

Try a free version of the service if possible and if you don’t like it, try something else. There’s a world of possibilities out there for you. While it may sometimes be difficult, and for good reason, it is by no means impossible.

Whether you are new to gay dating or have been comfortable with your sexual orientation for a long time, you may still have some questions about apps, where to go, and how to confront certain situations. We’ve answered some of the most frequently asked questions to help!

What is a good gay dating app alternative to Tinder?

Grindr is the obvious go-to for alternatives to Tinder when it comes to gay dating. It’s essentially THE hookup app to meet people who are gay and looking for a one-night stand. You can sign-up quickly and start browsing pics for a match in no time.
However, if you want a more intimate relationship via a dating app that’s giving Tinder a run for its money, Hinge is one of the best services around for connecting people together for serious relationships. It’s not for hookups, but that’s also the point.

Where can I meet other gay men in the LGBTQ community?

If you are new to gay dating, you might be at a bit of a loss for where to meet other gay men. One of the obvious go to’s would be gay bars, but you can also meet other gay men in the LGBTQ community at events, meet ups, marches, farmers markets, and more.
Gay couples meet for the first time and their first date in all places and doing all sorts of activities. If you’re really at a loss for meeting someone offline, you can even try speed dating for gay men and singles parties.

How do I deal with bigotry online?

Sometimes, straight men or just generally straight people may feel that the way you live your life and the people that you are attracted to somehow offend them, maybe even puts their own ideals and views into jeopardy. This can cause them to lash out with hateful feelings.
The best way to deal with offensive language, such as insults or even abuse, is to rely on the community around you for your support.
This can be family, your best friend, and other members in the lesbian, gay, bi, transgender, and queer community, as they would best understand your situation and be able to provide you with specific advice and support.