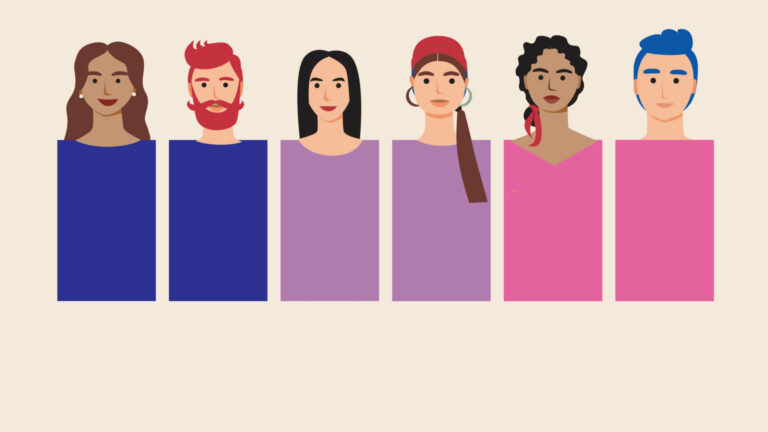 If you’re a woman that identifies as bisexual, pansexual, or queer, there’s a good chance that you may have come across people on bi dating apps that are looking for a “third”. Depending on what you’re looking for on these apps, it can be annoying to always be faced with people that are searching for their “unicorn”.

It can be difficult enough to find one person to date, especially if a woman is seeking out another woman. This can often feel like it’s opening the door for unicorn hunters to swoop in and try to pull you into their relationship. So, what exactly is a unicorn, and what are unicorn hunters?

What are unicorn hunters?

Despite common misconceptions, unicorn hunting is different from polyamory. When a couple is looking for a “unicorn”, it usually comes with the intention of experimenting within their own relationship and often doesn’t go beyond a hookup.

The reason the person that the couple is looking for is called a “unicorn” is because the unicorn hunters are expecting to find someone that meets all of their expectations, like a needle in a haystack.
Usually, the person they are looking for is a bisexual woman that is attracted to both people in the couple, but won’t interfere with their pre-established relationship.

You’re bisexual, looking for a date and don’t know how to start? We provide you with the best advice on how to date as a bi person.

The problem with unicorn hunters in online dating

We’ve defined what unicorn hunters and unicorns are, now let’s get into some of the issues that they cause in the bi dating scene.

There are some identifiable red flags involved with unicorn hunters beyond specifically seeking out bi and queer women.

One of these red flags is it is often the woman in the couple that makes the dating app profile and tries to connect with other women. A common issue is the woman isn’t always upfront about her male partner or their intentions with finding a third person.

Another red flag with unicorn hunters is the endemic lack of transparency both on their dating profile, and when they begin to talk to the outside person.
As we mentioned earlier, one of the ways their intentions can be hidden is the profile only showing the woman of the couple and not showing much if anything about her partner. Even if both people are shown on the profile, they might not be clear about what their intentions are and whether or not they are specifically looking for a hookup.

According to a small survey done by Bi.org, only 64% of individuals that took the survey said that unicorn hunters that they encountered on dating apps were upfront about their intentions. However, another 34% of people reported that the couples are generally vague, deceptive, or coercive.

Based on some of the personal stories on Bi.org from people that were “unicorn hunted”, some of them claimed that they weren’t aware that one person they were talking to were already in a relationship and only started to be coerced once they met up with them in person along with their partner that was never mentioned.

To summarize, the biggest issues with unicorn hunters is their tendency to search for bisexual, pan, and queer women, not being upfront about their sexual relationship intentions, and creating a power dynamic that doesn’t let the third person into their relationship in the same way polyamorous people would.

How to react if you spot a unicorn hunter

How you choose to react can depend on the location and your comfort level. For example, if you’re at a bar and see someone being approached by two different people and they’re showing discomfort, you can help take them away from the situation or report it if you feel safe to do so.
On the other hand, if you’re approached in public, you can always leave the situation if you feel unsafe or ask someone else for help.

If you’re using dating sites or apps, it can be more limited on how you can respond depending on the restrictions that those sites put in place. Many dating apps don’t allow users to message each other without matching first.

If you did match with someone and you discover that they are a unicorn hunter and it’s not something you’re into, you can simply let them know you’re not interested. If needed, there should be an option to block that user from messaging you if you feel uncomfortable.

Even if you match with someone or agree to meet up somewhere for the first time, you don’t need to be held under an obligation to do so. If you feel uncomfortable or unsafe, especially if the situation changes, you don’t need to continue seeing that person.
If someone meets up with you without telling you they were already in a relationship and the other partner shows up, that isn’t consensual.

How do I meet other bi singles for serious relationships?

Technically, you can meet bi women and men anywhere in the world. You don’t have to be limited to specific places, but there is some truth in it being a bit easier to find mutual interests in people online. This is partly why free lgbtq+ dating sites and apps have become so popular.

If you’re not interested in using dating apps but you’re trying to find other people from the bi or LGBTQIA+ community to date, try looking for clubs or events that are set up by other LGBTQ people.

Another option is to see if there are any gay or queer bars in your area. Even though gay bars are historically safe spaces for gay people, many of them have become a welcoming place for everyone, regardless of your sexuality or gender identity.

Check out the top recommendations for bisexual dating services. Sign up for free today!

​​​​What are the best dating apps for bi people to use? There are many different apps out there, all with their own similarities and differences. Below, we will list some of the apps that we believe can be the best for bi, pan, and queer people to use.