What is a shemale and why you should never use that word. 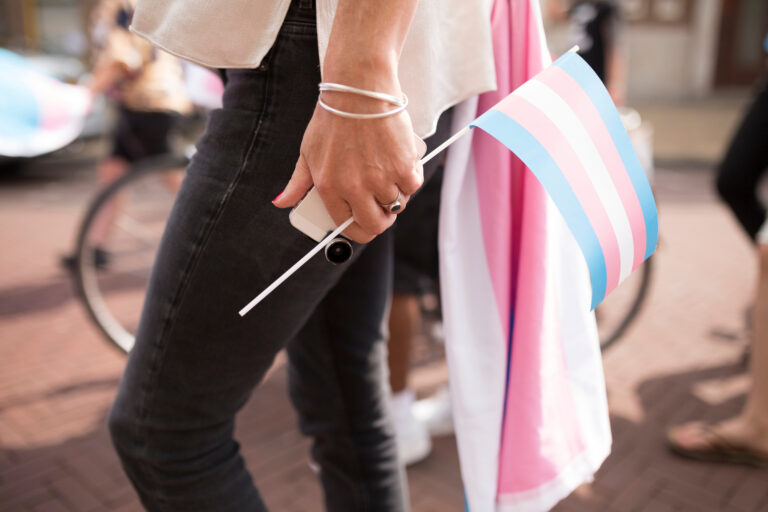 In this article, we’ll explain why the term is derogatory and what its origins are, as well as what the proper terminology is in the LGBTQ+ community for trans individuals. Read on to learn about how trans people have been fetishized, and how you can be a better ally to them!

What is a shemale?

To begin with, “Shemales” don’t really exist in the sense that they are portrayed. The phrase is a transphobic one as well that is now considered a derogatory term, debasing trans persons to sexual objects. Use of the term is now a slur amongst the LGBTQ+ community.

According to wikipedia, “Shemale is a term most commonly used in the pornography industry to describe trans women or other people with male genitalia and female secondary sex characteristics (including female breasts) acquired via hormones or surgery.”

Along with other phrases like “ladyboy”, “tranny”, and “transvestite”, the trans community has had to fight against dehumanizing, impersonal labels that have worked against the legitimization of their identity and struggles in day-to-day living.

New to dating transgender women and want to get off on the right foot? Prepare yourself as best you can by reading up on how to treat her right and on what to avoid!

What is TS dating?

This is especially true for TS dating, which is often associated with casual dating, meaning one night stands, hookups, etc. The effect it has on users is that they search for hookups with trans people using these terms, and thus propagate further usage of said terms.

Non-trans members often register hoping to have sex with someone that reminds them of the “shemales” they are familiar with from pornography. They do not always realize that their approach is problematic.

The world of trans relationships has had many unfortunate instances and areas that have been fetishized by pornography and other niche sex services, including linking cross-dressers to the sex trade and hermaphrodites to sexualized spheres of dehumanized othering.

Contrary to their portrayal in sex work as objects meant to be used and often discarded, relationships based on romantic interests and emotional bonding, as well as physical attraction, existed.

Coined by transgender writer/model/performer, Piper in 2013, the phrase “transamory” refers to “Being romantically and/or sexually attracted to transgendered people.” It is around this kind of relationship that dating services have evolved, moving around from hookups and sex.

That doesn’t mean that there isn’t a fetishization around the idea of transamory relationships either. Often, they are fixated on a particular idea of a trans person, and limit their interest in genders to a specific community of trans people.

Trans individuals, as well as the dating industry, have come a long way toward having a space that recognizes trans people as people with a need and right for serious romantic opportunities.

What is the appropriate terminology to use?

If you are new to dating trans people or to the LGBTQ+ community, you may feel that there are a lot of terms which can seem daunting to work your way into at first. However, it’s really much easier to approach this than you may initially think.

The key is really common sense: approach trans people (and anyone else, really) with respect, awareness, and for trans people especially, a desire to learn about gender with an open and understanding mind.

Being respectful toward someone is an important step in making sure you don’t hurt anyone’s feelings, and makes it clear that even if you do make a mistake in terminology, you aren’t intending to do so and are willing to correct yourself.

As for specific terminology, it can depend on each person’s case. Generally, terms like transgender woman, transgender individuals, or trans woman / trans man are acceptable. The short form “trans” is also acceptable in the right context too.

Be careful about synonyms you aren’t sure of, as you may accidentally offend someone.

The big thing to remember is that, other than being respectful, if you aren’t sure, politely ask what they would prefer to be called. Most often it’s going to be their first name, obviously, but if you want to ensure you don’t mix up their genders, ask about their preferred pronouns.

Tips for dating someone who’s transgender

If this is your first time dating a transsexual woman or man, the important thing to remember is that they are a person just like anyone else. You don’t need to keep them at a distance or on a pedestal, simply treat them with respect like you would any other person you date.

Take them out to dinner, grab drinks with them, and go dancing or clubbing. Do all the usual things you do when you date and if they want to take the lead, feel free to let them.

Your reasons for being attracted to someone transgender, for example as a cis-man attracted to a trans-woman, shouldn’t be hung up on a fetish, but an actual consideration for their individuality and personhood. You should be attracted to that person rather than an idea.

Don’t ask any crude questions upfront without giving them time to be comfortable with you and open up. Asking stuff about their make-up or use of hormones is something personal, and if they feel like telling you they will.

Don’t rush a relationship either, and don’t treat them as sexual objects that are debased past their individuality.

To put it simply, TS dating apps are essentially casual dating services for hookups with trans individuals. These are primarily services that facilitate meetups between cis-men and trans-women, although trans people also use them to meet other trans hookups.

Many of the apps offer flexibility with their services, so it is possible to meet someone there for a real, long-term relationship. Apps for this include Taimi, okCupid, and Her.

Safe, trans-friendly dating apps are more for long-term relationships and serious romance. Sites and apps like these include TG Personals, transgenderdate, MyTranssexualDate or tsdate.

You want to know more about the process of transitioning? Here’s how to become trans

FAQ about transsexual and transgender people

Whether you are new to the transgender community or are looking for more information that isn’t just some wiktionary article, it’s always important to be willing to ask questions first. This is why we’ve taken some of the most frequently asked questions and answered them.

Is it appropriate to use the term shemale?

Why is the word shemale still used so regularly in pornography and dating?

It’s hard to say exactly why, but part of the problem with it being used is that it was a recognizable term in pornography that potential users and customers recognized, and so it was easier to sell to that market using familiar language. Dating followed suit, largely.
That doesn’t make its usage acceptable, and trying to remove offensive language like this from pornography and online dating is a slow process. However, that’s all the more reason to be insistent on avoiding its usage and modernizing those industries’ terminology.

How can I be an ally to those who are using transgender dating?

Be respectful and supportive in the ways that they need on an individual, personal level. Encourage them when they need it and most importantly, listen to what they have to tell you. Pay attention to their needs and do what you can to help them.