Why lesbian relationships are better 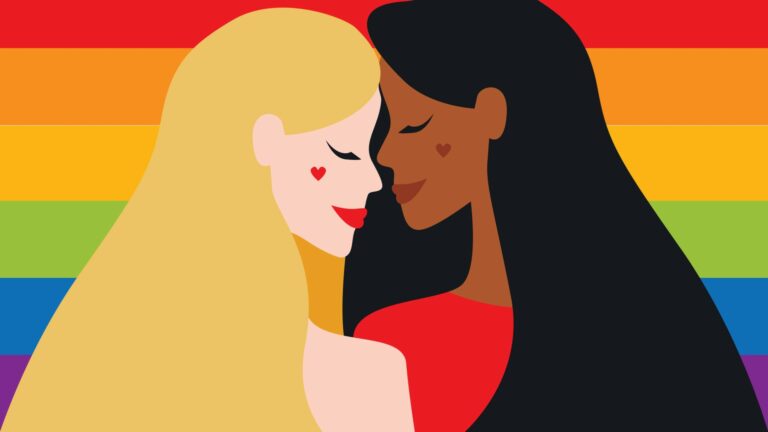 Are you in a lesbian relationship thinking that it feels more solid and healthy than anything you’ve ever had? There could be some truth to it.

In 2017, a study by Francisco Perales and Janeen Baxter from the University of Queensland found that same sex couples have happier relationships than heterosexual couples.

The study also revealed that bisexual people seem to be the unhappiest in their love life.

It is an unspoken truth that queer women who date each other understand one another in that very special kind of way that heterosexual women and men dream of.

But what is it about lesbian relationships that makes them better? What do lesbians have that heterosexual couples don’t? And what are some benefits of homosexual couples? You’ll read it all in this article.

Benefits of Being in a Relationship with Another Woman

Relationships between women, no matter of what nature, are complex, special and simply wonderful. We’ve seen the strongest bonds of friendship, family or passionate rivalry in a plethora of female-focused media.

But love between two female-identifying individuals?

That is another level of special and fabulous. And here are some reasons and proof for that.

Research & Findings of A. Kurdek

In 1993, A. Kurdek published an article in the Journal of Marriage and Family that examined heterosexual relationships and same-sex relationships who were cohabiting to understand if LGBT relationships were different from their straight counterparts.

As our relationship expert Lauren Aadland summarizes his findings:

Kurdek found that there’s not a big difference between the dynamics of relationships based on sexual orientation. In general, all types of couples follow traditional highs and lows, though LGBT couples did face additional societal challenges.

There was something major to note though. Gay and lesbian couples shared household tasks much more fairly, and lesbian partners shared the labor almost evenly. While this may seem like a small thing, let’s look at the implications of this.

Lesbian relationships are said to proceed much more quickly. One date, and you feel like you want to move in together (and some even do after a short amount of time).

Maybe it’s because of that instant emotional and physical connection, the emotional availability that is more common or that women are more likely to settle down faster, but it seems like there’s a high investment in making it work with your spouse.

Knowing that you’re both in for a future together after just a few dates builds trust and connection.

Of course you’ll go through the 7 stages of dating as well, but playing games is not as common as for straight daters which may lead you to believe that the whole dating process is much more pleasing between homosexual women.

Biology has made us natural caregivers. Your female partner cares for your well-being as well as you do for theirs.

It’s the little things like tucking you in when you fell asleep on the sofa or cooking you some soup when you’re sick, that will make you feel safe and protected in your relationship.

If you’re both taking care of each other, there’s much less imbalance of giving and taking than there can be in straight relationships.

In their 12 year, longitudinal study published in The Journal of Homosexuality, Julie and John Gottman PhD et al. found that gay couples, lesbian women, and straight couples deal with conflict in quite different ways.

The Gotmanns found that gay men and lesbian couples are more positive when bringing up and reacting to a point of conflict with their partners. LGBTQ+ couples rather use humor and affection during conflict than controlling and emotionally manipulating tactics, which leads to an improved mental health of each partner and higher relationship satisfaction over all.

They are also more likely to remain positive after a disagreement. That means that same-sex couples can be said to handle conflicts more fairly. Also, a balance of power seems to be of outstanding significance.

Stating the bold and obvious, if you’re a cis lesbian, you’ll know what feels good and what doesn’t. If both of you are cis, you’ll find that sex in your relationship is very fulfilling.

But even if one of you isn’t a cis woman, you’ll feel that talking about sex might be easier and that your partner is more open and understanding than you’d expect others to be.

Furthermore, a study by Garcia, Lloyd, Wallen, and Fisher conducted in 2014 found that lesbians have more orgasms than heterosexual women who are dating. They called this phenomenon the “orgasm gap”.

The researchers found that due to a longer duration of ‘the act’ itself as well as of the foreplay, lesbian women achieve a higher level of arousal when having sex. Hence, they are more likely to reach a climax than straight women.

It goes without saying that communication is essential for a good sex life. And fact is that women and female-identifying individuals feel more comfortable talking about their turn-ons and turn-offs with a queer partner than people often do in straight dating.

Although societal expectations are changing, straight women still feel the pressure of fitting into their traditional gender role in a heterosexual marriage. They’re expected to get married, get pregnant and be the one responsible for childcare in the end.

Although this might not be the case for all straight couples, and many take a more modern approach to gender roles, there’s by far less concern about them for lesbian and gay people.

There might be less, or at least less conflicting, discussions about who’s going to be responsible for childcare and who’s going to continue working.

Of course, lesbian dating and creating a future together comes with its own set of difficulties, which you can read further down below.

Understanding the highs and lows of being a queer woman

Being part of a LGBTQ+ couple, you’ll understand what difficulties come with being queer.

Whether it may be coming out, starting a family or finding acceptance in different parts of life – you’ll know what other women of the community go through because you might have experienced it yourself.

However, the good thing is, you stick together when one of you hits rock bottom and celebrate the uplifting moments with each other.

There’s probably nothing that causes more trust and empathy than sharing experiences, a similar background and sometimes even trauma.

Need more proof that lesbian relationships are better? These famous couples will show you!

As great as relationships are, there will be some points of conflict here and there. Here are a couple of difficult things women often face in lesbian dating. However, if you’ve found the right one for you, there will be no problem in solving them.

The fine lines between friends and lovers

You’ve got to trust your intention in finding out whether there’s more between you, but here are some signals that might imply she finds you a little more interesting than the other women around her:

Assumptions by other people

While you might be completely comfortable with shifting away from traditional gender roles and expectations, straight and less-educated people might be confused by your sexual orientation.

You may find people who will ask questions like: “But, who’s the man?”

Fortunately, their lack of understanding is not your or your partner’s problem and shouldn’t affect your relationship. Still, it can be nerve wracking to deal with these comments.

If you’ve been happily together with your partner for several years, the wish might arise to raise a child together.

And you’ve basically got two options: Adoption or artificial insemination.

While it might not be the easiest thing to adopt a child for married couples in general, adoptions for same-sex couples are far more complicated. Same-sex marriage might be accepted but adoption rights are not where they should be.

The process of constantly proving to an insitution that you can take care and love a child just as good as hetero couples can, is draining and can bring you many disappointments and annoyance.

Artificial insemination or in vitro fertilization may seem less complicated at the first outlook. And if you and your girlfriend are on the same terms about motherhood, it probably is. But deciding who’s going to carry the baby or deciding for which procedure to go for might stir some conversation between you.

While the stereotype that lesbians rush into love and relationships has some truth to it, it’s not necessarily healthy for every individual to hear the wedding bells after only a couple of dates.

For once, depending on your style of attachment, it might build up some pressure for one of you. At one point or another, you might feel like there’s too much, too fast. Before you decide to crawl back into your shell of solitude, talk it out and slow things down.

Even if it hurts for a moment, it’s sometimes best to take a step back and find your pace to build a solid and healthy relationship.

The usual challenges of dating

Should I text her first? How many days should I wait until I call her? Did I overshare? Did I act weird? Will she ghost me?

Dating is as difficult as it is exciting, no matter your sexuality or gender.

You may find yourself doubting your confidence, especially if you got rejected a few times before. But keep in mind that it’s perfectly normal to experience disappointment and insecurity in dating.

Learning how to navigate and finding a rhythm with your desired partner is essential, but it takes time.

Check out our latest recommendations for lesbian dating sites and apps:

How to make your lesbian relationship a happy one

The key is to always communicate open and honestly. If something is bothering you or you don’t feel comfortable in certain situations, talk to your partner about it. In healthy relationships, there is no place for repressed aggression and swallowed anger.

Believe us, if you bottle it up for too long, you’ll find yourself exploding in the end. And that’s not going to be pretty.

Remember that arguments are normal and necessary. Even if it puts you in an odd place to argue, finding a way to do it fairly and to find common ground is wonderful and eventually, it creates an even stronger bond between you and your partner.

Respect each other’s boundaries. Learn what’s okay and what’s not acceptable for you and your partner. Every person has something that’s off limits for them. If you want to keep the relationship stable and healthy, you better react to the signals and give your partner (and yourself) space if she needs it.

Everybody needs a little time for themselves, a little space to breathe from time to time. It doesn’t mean they don’t want to be with you, it just means they’re trying to establish and keep a good relationship with themselves, too.

Take your time to date each other. Even if you’ve been in the same relationship for years, going out for dinner or a movie every now and then, or even doing something more fancy and adventurous like rock climbing or taking dance classes, will fight the routine.

Spending time just by yourselves will keep the spark between both of you.

You haven’t found your perfect match yet?

Luckily, most of today’s popular dating apps have enough options for lesbian, gay and queer dating.

Here are some of the dating apps that are highly popular among the lesbian community:

Most of these apps that cater to lesbian women are not only a great way to find flirts and love, but also a suberb place to find contacts from the LGBTQIA+ community. They also often function as dating guides and LGBTQ+ news outlets or social networks.

If you want to increase your chances in finding the One for you, you can join one or even more and just see what their dating pool offers.