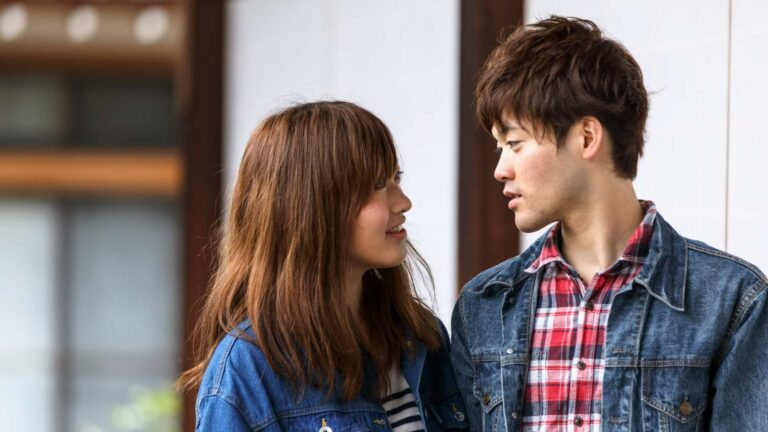 The Japanese dating culture may be different from the dating culture you grew up in. It’s not uncommon for people to run into some challenges when dating Japanese singles, especially if they come from a very different background.

If you’re interested in dating a Japanese person, or if you already have a Japanese girlfriend or boyfriend, it’s important to understand the cultural differences. With a few tips, you can learn how to navigate different cultural norms with ease.

Disclaimer: This article in no way aims to perpetuate stereotypes or prejudices towards those from a specific culture. Use this guide for general insights on Japanese dating culture, while keeping in mind that not all Japanese people follow the same attitudes or behaviors.

Japanese dating culture is often driven by a clear purpose. While some Japanese people do prefer to date casually, for most marriage is the end goal.

In fact, a recent survey showed that one out of six marriages in Japan began with konkatsu (marriage hunting) services. It’s not unusual for people in Japan to attend konkatsu parties or pay matchmakers in the hopes of finding “the one.”

With this in mind, don’t be surprised if marriage is brought up in conversation before you’ve established an exclusive relationship. Japanese singles who are looking to marry just want to make sure you’re on the same page. In other instances, marriage might not be mentioned at all, especially if your Japanese date is still unsure of their dating goals.

Group dates are common in Japanese culture, especially early in a relationship. If your Japanese date suggests inviting other singles or asks to double date, they’re not trying to friendzone you. Rather, they want to get to know you without the pressure of a one-on-one date.

One-on-one time in Japanese dating culture is sacred, so if you do land yourself a private date, don’t take it lightly. The other person clearly has an interest in you, so it’s best to put your best foot forward, using appropriate etiquette along the way.

Japanese dating culture is known to be more conservative than many western cultures. And with that comes some formal etiquette and some informal rules to follow. If you want to leave a good impression on a Japanese man or woman, keep these tips in mind.

For many Japanese singles, being showered with affectionate words can feel a little awkward. In Japan, it’s common to use acts of service, not words like “I love you,” to show you care.

If you want to make your partner feel comfortable, use actions like opening the door or giving them a small gift. These small gestures mean a lot in Japanese dating culture.

On that note, don’t be alarmed if your date doesn’t directly verbalize their feelings. They’re not cold or disinterested; they just choose another way of expressing themselves.

Who Should Pay the Bill?

If you’re dating a Japanese person, expect to split the bill during your first dates. That way, the relationship can form on equal ground, and no one feels indebted to the other.

If you’re dating a Japanese woman, she still might prefer you to pay, or at least offer to. On your first few dates, tell her you’re happy to pay the bill yourself. If she resists, respect her wishes and split it instead. Chances are she’ll appreciate your offer regardless.

In any culture, it’s a faux pas to embarrass your date. But when dating a Japanese woman or man, it can sometimes take less than you’d expect to make them feel uncomfortable in public.

Japanese culture values blending in and maintaining group harmony. Collectivism, rather than individuality, is likely the norm for your Japanese date. Whether you’re dating in Japan or the U.S., you might want to play it safe by blending in when in public.

For example, avoid being loud or drawing attention to you and your date. There’s no need to show off—you might just embarrass your partner by doing so.

Also, be on your best behavior when interacting with others on your date. Be kind to waitstaff, and refrain from sending back a wrong restaurant order. In Japanese culture, many people prefer to ignore trivial issues rather than arguing with a waiter or creating unnecessary conflict.

Another way to potentially embarrass your Japanese partner is by going heavy on the PDA, or public displays of affection.

Kissing, hugging, and touching in public is typically a no-no in Japanese dating culture. When in public, and especially early in your relationship, maintain some space between you and your date. If they seem comfortable with a little touching, a safe exception is hand-holding.

From First Date to Relationship: How to Act in Japanese Dating Culture

Because many Japanese people date to marry, it’s important to leave a positive impression from the very first meeting. If you impress your partner on day one, you could have a long and happy future ahead of you.

Here’s how to act with a Japanese man or woman, from your first date and beyond.

In Japanese dating culture, it’s generally the norm to plan and organize dates in advance. Especially if you’re dating a Japanese woman, a little planning can go a long way to impress her.

Dates that last for hours, or even all day, are common in Japan. Take your date to a fun area with plenty of things to do so you don’t get bored while getting to know each other. Ideal date spots include:

Keep your first date neutral and low-pressure, until one or both of you have clearly communicated your feelings for each other.

You’ve spent time together, and you’re really into your Japanese date. If you want your relationship to progress, a confession is the next step.

Formal confessions are a cornerstone of Japanese dating culture. In these confessions, one person reveals that they have feelings for the other, triggering the start of their relationship together.

Confessions are very serious, almost like a marriage proposal in the U.S., but they aren’t typically delayed. Many confessions can even occur before the first date. These confessions are one of the only times Japanese people openly share their feelings.

If this sounds like love-bombing, it’s not. Often, Japanese people don’t want to bother with dates until there’s already a spark.

If you want to continue seeing your Japanese partner, then, be prepared to give (or receive) a  confession soon. And if you were wondering which gender is expected to initiate a confession, it’s socially acceptable for both men and women to confess their feelings first.

As you continue dating your Japanese partner, you may notice some natural progressions in your relationship. For example, you might have used their last name on your first dates, according to Japanese customs. As you spend more time together, start using their first name to convey your closeness.

Another important move as your relationship develops is meeting each other’s families. In Japanese dating culture, meeting a partner’s family is a sign you hope to get married. It communicates how serious and committed you really are to each other.

Things to Keep in Mind for Americans Dating a Japanese Person

When dating a Japanese person, you might face new challenges. For some, the gender roles commonly found in Japanese dating culture can come as a surprise. They may be the complete opposite of what you expected.

Here’s what you should know when dating a Japanese man or woman.

Unlike in American culture, Japanese men aren’t typically raised to make the first move or be assertive in relationships. Depending on your personal preferences, this could be a good or bad thing.

Either way, you might find your Japanese male partner to be a little shy at first, but don’t be mistaken: he’s mostly likely full of personality and charm once you get closer.

Outspoken women may worry that they’ll intimidate a Japanese man. But just like in other cultures, this isn’t necessarily the case. Some men enjoy being led, while others who appear quiet in the beginning might match your big personality as you spend more time together.

Old stereotypes say that Japanese women are subservient or submissive. When dating a Japanese woman, it’s best to abandon this belief as soon as possible.

Many Japanese women do admire a stronger partner who can lead and protect them. But you’ll likely find that many modern Japanese women also have their own goals and priorities outside of romance.

Don’t expect a Japanese girlfriend to always put you or the relationship first, and don’t assume she doesn’t have strong opinions or a fierce personality of her own. Appreciate the complex facets of her personality, and she’ll likely return the favor.

Special Considerations When Dating a Japanese Girlfriend or Boyfriend

If you’re new to dating a Japanese person, it’s important to be aware of comments or beliefs that could be culturally inappropriate or offensive.

Keep an open mind with your Japanese partner. And when in doubt, ask questions about their Japanese background to learn what’s fact and what’s fiction.

Here are answers to common questions about Japanese dating.

How can I find a Japanese girlfriend or boyfriend?

What is it like to have a Japanese girlfriend?

Despite what you may have heard, having a Japanese girlfriend isn’t so different from having a girlfriend from your country. While there may be cultural differences, expect to put time and effort into your relationship, just as you would with any other girl.

A Japanese partner can be affectionate, but it might not be in the way you’re used to. Physical touch, like a hug, is commonly reserved for private time at home. A Japanese partner may also not give direct compliments or say “I love you.”

However, they can still be very affectionate through caring gestures and helpful actions.

Do Japanese people ghost in dating?

Ghosting has become common around the world, and it happens with Japanese dates too. Because Japanese culture promotes reading between the lines, a Japanese man or woman may try to show they’re not interested in pursuing a relationship by becoming unavailable.

Just like in other cultures, this can eventually lead to ghosting, where you never hear from them again.

Is there LGBTQ+ dating in Japanese culture?

Japanese culture understands and generally tolerates LGBTQ+ dating, but it isn’t as normalized as in western cultures. Some Japanese people hide their sexual orientation, so you might find your date is more protective over their identity and preferences than you’re used to.

Japanese people do hookup and use casual dating sites and apps to initiate one-night stands. However, keep in mind that in Japanese culture, there’s a well-defined line between hookups and serious dating. For many Japanese singles, hookups aren’t a good way to begin a relationship.

When dating a Japanese person, you’ll likely come across some challenges and social differences. But these differences don’t have to get in the way of developing a healthy, happy relationship.

Use the tips discussed above, while keeping in mind that every Japanese man and woman will be unique. If you’re ready to find your match, sign up for a dating site and start chatting with Japanese singles!