Dating in Jordan: The Best Jordan Dating Sites and How to Meet Jordanian Singles (2022) 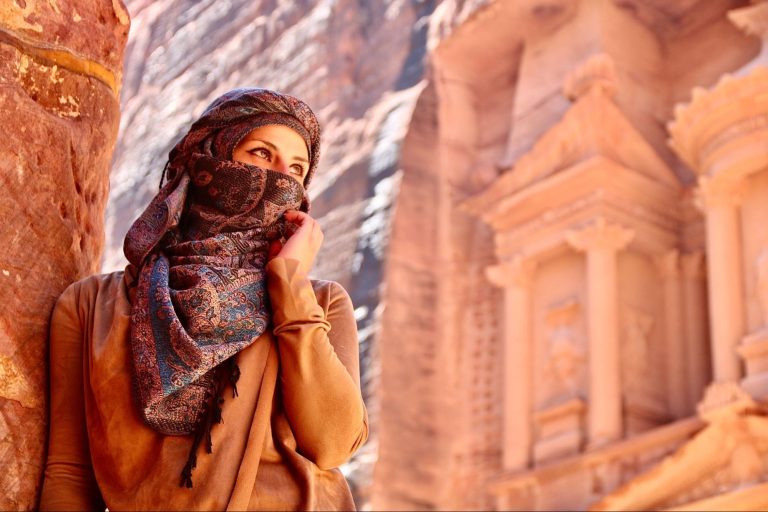 Jordan is a country rich in tradition and history but dating in Jordan can be a challenge for Westerners. But still, there is a good chance of meeting Jordanian singles in the country or on Jordan dating sites—if you know the local dating etiquette.

Disclaimer: This article in no way aims to perpetuate stereotypes or prejudices towards those from a specific culture. Use this guide for general insights into the Jordanian dating culture, while keeping in mind that not all Jordanian people follow the same attitudes or behaviors.

Some popular Jordan dating sites for meeting international singles are Bumble, Badoo, Pure, Zoosk, or OkCupid. Other free dating apps used in Jordan are Bubu dating, iHappy, and SweetMeet. Keep in mind that dating in Jordan is taken seriously, so it may be best to opt for serious Jordan dating sites, such as:

Muslima.com is designed for bringing single Muslim men and women together with the intention that they build a lasting halal relationship and happy marriage or “nikah.” With over 4.5 million members, Muslima is leading among Jordan dating sites.

Located in the heart of three continents of the ancient world, Jordanian dating culture is heavily influenced by tradition and history. Most Jordanian singles value honesty, hospitality, and courtesy.

Jordanian culture is known for its hospitality. Wherever you go—you are guaranteed a warm reception. If you are a foreigner dating a Jordanian single, you will most likely be invited to coffee, tea, sweets, or even a traditional meal with the family. Keep in mind that refusing or ignoring an invitation can be seen as rude.

Jordan is a highly religious country. More than 82% of the population are Muslims. The majority of Jordanians practice their religion in mosques. Most Jordanians follow Islamic principles which directly influence their dating culture. Casual dating is rarely seen in Jordan and alcohol is only served in specific places.

Jordanians put much more energy into social relationships than Westerners. It is normal to greet strangers on the street like old friends, and exchange opinions and advice. They tend to smile, exchange pleasantries, shake hands, and give out cheek kisses to strangers. Personal space does rarely exist in Jordan. So don’t be alarmed if you see your date being very friendly to strangers.

Jordanians follow a very different dress code than Westerners. Long, loose-fitting trousers are essential and any top that doesn’t cover your shoulders and upper arms might as well count as underwear. Most Jordanian women cover their legs and arms loosely. The neck and hair are considered sexual and are best covered, too.

How to meet Jordanian singles

As meeting singles offline in Jordan can be a challenge, Jordan dating sites are a good alternative to connect to Jordanian singles. Most Jordanians prefer to get to know each other before they meet in person, and dating apps help you to achieve that. Jordan dating sites are used preferably to find a serious commitment rather than a casual hookup.

Meeting Jordanian singles during the day is not the easiest thing, as Jordanians tend to be very conservative. It is not recommended to approach someone in the streets, and if you do so try to be quick and discreet. Some popular shopping malls are Abdali mall, City mall, Taj Mall, and Amman mall. You can also try your luck at one of the beaches or parks in Amman or Aqaba.

In Jordan, alcohol is only served in specific bars and it is recommended to avoid drinking in public. In the capital Amman, you will find some bars and nightclubs in Paris Square and Rainbow street. Many foreigners also rent a room in one of the many hotels, which tend to have trendy bars.

How to act in Jordanian dating culture: first date to relationship

The dating process might take longer in Jordanian culture, as it is considered important to first get to know each other and gain trust before getting intimate. In fact, intimacy and close physical contact before marriage is discouraged in Jordan, but people can still meet on Jordan dating sites.

Most Jordanian singles date in order to start a serious commitment, get married, and have a family together in the future. They like to discuss the possible future family life early on in the dating process. The family’s blessing is considered important before moving on to something more serious.

Having a big family is the dream of many Jordanians. According to statistics, Jordanians tend to have 2-3 children. Jordanian women are known to be great housewives and mothers that like to take care of their homes. Traditional gender roles are still present, and most women consider the man to be the leader in the relationship. Most Jordanians are very devoted and support each other no matter what.

Things to keep in mind for Americans dating in Jordan

Where can I meet women in Amman?

The capital Amman offers many locations to meet local singles. One of the most famous nightclubs in Amman is the Cube Lounge in the Sheppard Hotel. You can also try to meet women in cafés, malls, or parks—but keep in mind to act very discreetly when approaching a local woman.

Is dating allowed in Jordan?

Dating is allowed in Jordan, but it is encouraged to keep the local customs in mind. In Jordan, sleeping with any unmarried member of the opposite sex is considered adultery and punishable by prison. Also, public displays of affection such as holding hands, caressing, or kissing in public are frowned upon.

Is there nightlife in Jordan?

Yes, Jordan offers vibrant nightlife. Especially in the capital, you can find many restaurants, clubs, bars, and local events. For recommendations see above.

Dating in Jordan can be a joyous experience if you keep the local customs and rules in mind. Jordan is a very conservative country and most of the people are part of the Islamic religion. Jordanian singles are known to be loyal, discreet, and hospitable. Besides local establishments, you can meet local singles on Jordan dating sites. Try to keep the above-mentioned cultural customs in mind to ensure a good dating experience.

Learn more about the best Jordan dating sites and start connecting with Jordanian singles on one of the best online dating apps!